Identification of microorganisms is done in two steps;

Step I: Examination under the microscope

Examination of microorganisms under microscopical examination, biochemical test plays important role in identification, classification, and confirmation of microbes. It includes various tests as given below;

Amylase is an enzyme present in all living organism which plays important role in chemical process of digestion. It hydrolyzes starch into sugars by breaking down glycosidic linkage. Starch is a complex carbohydrate made up of glucose which acts as source of carbon and energy.

This test is based on the principle that amylase results in the breaking of starch in sugars. In this test, iodine reagent is added into media which gives bluish-black color by the formation of a complex with starch. If a microorganism is able to produce enzyme amylase, it hydrolyzes starch into maltose and glucose which indicates by the disappearance of color around colonies.

Observe the plates for starch hydrolysis around the streaking of each organism and check the color change of the medium,

Discoloration of iodine around colonies indicates hydrolysis of starch by amylase and vice-
versa.

Cellulose is a basic structural material of plant species. Chemically it is polysaccharide of glucose residues with beta 1, 4 glycosidic linkage. Degradation of cellulose is brought by some bacterial species with the help of the enzyme cellulase. It can be used for identification of cellulase producing bacteria like Acetobacter, Rhizobium, Achromobacter, Escherichia and Sarcina.

Observation: Examine the plates for the formation of a clear zone around the colony.

Result: A clear zone observed around the bacterial colony of Bacillus cereus indicates the degradation of CMC by the presence of extracellular enzyme cellulase.

Aim: To check the activity of bacteria to degrade urea by the enzyme urease.

Urea is water soluble, nitrogenous compound which is produces in urea cycle by decarboxylation of amino acid arginine. It excreted in urine as a nitrogenous waste product. Some bacteria have ability to produced enzyme urease which breakdown the urea into ammonia and carbon dioxide. Due to formation of ammonia, pH becomes alkaline. This change in pH can be use as identification parameter for bacteria by using pH sensitive media. In this test urea broth is use which shows formation of pink color at alkaline pH.

Preparation of urea agar is same like that of broth, but add solidifying agent Agar-agar. Mix thoroughly and add in the sterile test tubes. Keep the tubes in slanting position and make the urea agar slant.

Most suitable media for this test is Triple Sugar Iron (TSI) media which can be use as TSI slant and TSI butt. The TSI slant is preferable for aerobic microbes while TSI butt is for anaerobic growth.

The formation of black precipitation indicates a positive test and vice-versa.

Casein hydrolysis test is use for identification of casease forming microbes. Casein is a milk protein which is responsible for the white color of the milk. Due to its larger size, it is not able to permeate from plasma membrane of bacteria. Initially it get hydrolyze into amino acid by exoenzyme casease and then transported into the cell for catabolism.

This test is performed on skim milk agar plate. Milk agar is complex media containing casein, peptone and beef extract. If microbes are able to produce enzyme casease, it forms clear zone around microbial colonies by hydrolysis of casein.

Observation: Observe the formation of clear zone around colonies in comparison to positive
and negative control.

Microorganism like Bacillus, Clostridium, Proteus, Pseudomonas and Serratia utilizes gelatin as source of carbon with the help of enzyme gelatinase. Gelatinase is extracellular proteolytic enzyme which causes hydrolysis of gelatin. Hydrolysis of gelatin takes place in two steps. In first step gelatin get hydrolyze into polypeptides and in second step polypeptides are further converted into amino acids.

This test is performed by using gelatin containing media. Gelatin is act as solidifying agent. If it undergoes hydrolysis, it loses its consistency which is indication of bacteria producing gelatinase. So, gelatin hydrolysis test can be used to identify and differentiation of gelatinase producing and non-producing microorganism.

Observation: If media undergoes liquification during incubation and even remain as liquid only during refrigeration indicates hydrolysis of gelatin by gelatinase.

This test is carried out to check ability of microbes to synthesize enzyme catalase. In this method, trypticase soy agar media is inoculated with test microorganism in which hydrogen peroxide is added after incubation time. Presence of catalase is identifying by formation oxygen bubbles in media.

Result: Release of oxygen bubbles after addition of hydrogen peroxide within one minute indicates positive test.

Pectolytic enzymes are synthesized by plants and microorganisms. These enzymes find application in food industries and in preparation of alcoholic beverages. Aspergillus niger produces enzyme pectinase which results into breakdown of pectin.

Observation: Examine the plates for the formation of a clear zone around the colonies of bacteria.

Result: Formation of clear zone around bacterial colonies or formation of precipitation after addition of hexadecyltrimethylammonium bromide indicates a positive result.

‘Carbohydrate fermentation test’ is used to determine whether bacteria can utilize a certain carbohydrate or not. This test is based on simple principle of production of acid and/or gas because of fermentation of sugar like glucose, lactose or sucrose.

Aim: To check the fermentation of sugars like Glucose, lactose or sucrose by bacterial cell

Sugars gets metabolized by microorganisms aerobically as well as anaerobiaclly through different metabolic pathways. Sugar fermenting bacteria utilities carbohydrates present in liquid media and produces either acid or gas as byproduct of reaction. Formation of acid is determined by using media which shows change in color by variation in pH. Generation of air bubbles in media is indication of gas formation.

Change in color from red to yellow and/or formation of air bubbles in Durham’s tube indicates positive test. 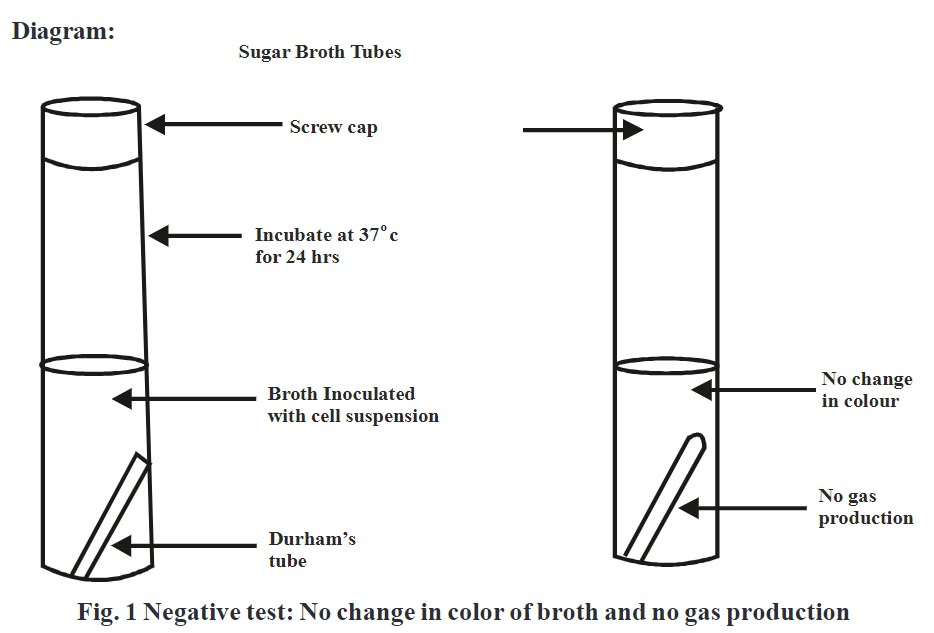 Aim: To perform manitol fermentation by using broth or media

Manitol is also act as source of carbohydrate which is fermented by microorganism and results in the production of acid as a byproduct. It is identified by using ‘Phenol red Manitol broth’ or ‘Manitol salt agar media’ which shows change in color from red to yellow by change in pH.

Observation: Change in color from red to yellow indicates formation of acid by fermentation of manitol.

Observation: If Manitol undergoes fermentation by microorganism it leads to form acid as a byproduct which causes change in pH towards acidic side. Change in pH results into formation of yellow color in media.

Result: Change in color of media from red to yellow indicates positive test and vice-versa.

Indol test is use to determine ability of certain bacteria to hydrolyze amino acid tryptophan to indol. This hydrolysis takes place in presence of enzyme tryptophanase.

Indol production test is important in the identification of enterobacteria and certain anaerobic bacteria. E.coli and Proteus vulgaris are most commonly detected by indol test.

It can be checked by two methods;

Observation: If bacteria produces enzyme tryptophanase it causes hydrolysis of amino acid tryptophan to indol which results in development of red colored ring at top of media.

Result: Development of red color ring at the top of media indicates positive test and vice-versa.

This test is use to determine indol by using indol spot reagent which contain cinnamaldehyde. Reaction between indol and reagent result in formation of blue green compound.

Observation: Reaction between indol and reagent result in formation of blue color within 30 seconds.

Methyl red test is used to identify bacteria producing stable acids as end product from glucose source present in MR-VP media. Certain bacteria have ability to perform mixed acid fermentation of glucose and produces lactic acid, acetic acid or formic acid at the end. Formation of acid decreases pH of media nearly to 4.0-4.5. It can be determine by adding methyl red indicator which shows change in color of media from yellow to red as pH changes toward acidic side.

This test is commonly designed for differentiation of enteric bacteria.

Observation: Change in color of media from red to yellow after addition of methyl red indicator indicates that a test organism causes fermentation of glucose present in MR-VP media.

Vogus Proskauer test is performed on MR-VP broth to identify organism from Enterobacteriaceae family like Escherichia coli, Enterobacter aerogens and Klebsiella pneumonia. Microorganism metabolize glucose in pyruvic acid which is further get metabolize into acetoin i.e. acetyl methyl carbinol as an intermediate and finally get reduced to 2, 3-butanediol. Formation of acetoin is determined by addition of alpha-naphthol and KOH which develops red color.

Observation: The formation of red color indicates that glucose get metabolize in pyruvic acid which is converted into acetoin.

Citrate utilization test is used to check the ability of organism to utilize sodium citrate as energy source. Bacteria utilize citrate as a carbon source by using enzyme citrate permease which converts citrate into pyruvate. This test is performed by using Simmonds citrate agar media containing citrate as carbon source and ammonium phosphate as nitrogen source. When bacteria metabolize citrate by using enzyme simultaneously ammonium salt gets convert into ammonia. Formation of ammonia increases pH towards alkaline side which can be determine by using bromothymol blue as indicator which turns medium from green to blue.

Observation: Formation of blue color at surface of slant indicates that bacteria utilizes citrate as a carbon source,

Identification of bacteria by biochemical test: