Design of a Fermentor 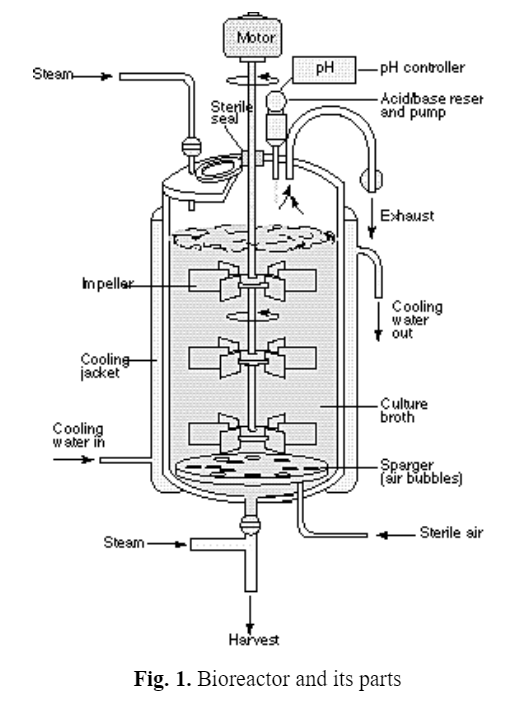 Pumps are used for the essential parts of the instrumentation system for measuring pH and antifoam and control. Peristaltic pumps are basically used and the flow rate is normally fixed with a timed system of control. For extremely high accuracy of addition, the reservoir bottles are placed on analytical balances, which can be used to determine how much reagent has been pumped in a given time.

Medium feed pumps are often used with variable speeds so as to give the maximum possible range of feed rates. An effluent pump isoften used to remove culture fluid form the fermentor vessel into a storage reservoir bottle.

A laboratory air supply is provided from a separate pump, which must be oil free. A variable area flow meter or rotameter is used to control the airflow rate into the fermentor vessel. A sterile filter (usually 0.22m) is used as a bridge between the tubing form the rotameter and that connected to the air sparger of the fermentor.

This allows culture fluid to be removed aseptically during the fermentation at intervals decided by the user. The frequencies of sampling and the size of each sample are determined empirically according to the needs of the experiment.

By the use of airlift the need for a stirrer can be minimized or can be neglected.

In fermentation process the microbes/cells are trapped in a physical medium and then put into the vessel by a mesh. The medium is re-circulated with a pump, which is easily adapted to give a continuous/semi-continuous flow to allow the trapped cells to effect chemical changes on constituents of the medium without being washed out along with spent medium.

In this cells are embedded in fibers contained in a cartridge, which are bathed in circulating culture medium. This is often used for mammalian cell culture, where anchorage-dependent cell lines can be perfused with oxygenated medium.

For fed-batch or continuous applications a separate feed pump is used.

The pumps used for medium feed are typically variable speed units, which can accept signals from an external source such as a computer or process controller to allow adjustment of feed rates based on for example, respiratory quotient (RQ) or optical density(OD).

This type of pump is typically used in medical applications for the precise delivery of drugs. Most now allow for computer control.

The exit gas may need to be conditioned (e.g. moisture removed) before going into the analyzer, depending on the type of instrument used.