The Platyhelminthes, the flatworms and their relatives, comprise about 15 000 species. Their size varies from less than 1 mm to over 35 m for the longest tapeworms. Marine and freshwater free-living platyhelminths are also found as ‘terrestrial’ forms which live in damp soil (effectively a semi-aquatic microhabitat utilizing the water films on soil particles), especially in the tropics. Large numbers of species are parasites that infest animals in most other phyla.

They are bilaterally symmetrical animals with a triploblastic body plan: the outer ectoderm surrounds a mesoderm which forms the muscles, reproductive organs and parenchymatous (packing) tissue. This in turn surrounds the endoderm which lines the gut. There is no enclosed body cavity, a condition known as acoelomate.

The gut has no anus (so waste is eliminated via the mouth, as in Cnidaria); the alimentary tract may ramify extensively to permit a large surface area for absorption of food and distribution of nutrients.

Locomotion in free-living platyhelminths is often by means of cilia which are used to glide over a film of secreted mucus. Muscles are also used.

The turgor of the tissues, enclosed in an integument coated with protective glycoproteins in parasitic forms, serves as a hydrostatic skeleton.

The flattened body gives a large surface area to volume ratio which facilitates the uptake of oxygen and the voiding of carbon dioxide and ammonia. There is no blood vascular system.

Osmoregulation is by means of ciliated flame cells which waft liquid through protonephridia, which in turn duct dissolved wastes to the body surface for excretion through pores.

The nervous system is very simple. There is rudimentary cephalization (the formation of a head with concentrated nervous and sensory functions) with pigment-cup eyespots, a group of cephalic nerve cells, and lateral nerve cords. Tactile and chemoreceptors are associated with the side of the head, sometimes on tentacles or in pits.

Flatworms can reproduce asexually by constricting themselves into two parts, each part forming a new worm. They show remarkable capabilities for regeneration. Sexual reproduction also occurs. Most worms are hermaphrodite and, in tapeworms, self-fertilization usually takes place. Yolky eggs are laid in ribboned cocoons; in free-living flatworms, they hatch into miniature adults, but parasitic worms may have complex life histories with successive larval stages and more than one host species in the life cycle. Some flatworms are parthenogenetic, with females producing further females without mating with a male.

The turbellarians are typically small, free-living ‘flatworms’. They are carnivorous scavengers that seize their prey with an eversible, protrusible pharynx. The ectoderm is normally ciliated. The gut is usually branched, the degree of branching forming the basis for the further sub-classification of this class: rhabdocoels have a single-branched gut; triclads (which have the widest distribution in terms of habitats) have a three-branched gut; the exclusively marine polyclads have a many-branched gut. The Turbellaria may be the ancestral platyhelminth group, giving rise to other platyhelminths and perhaps to Nematoda. An example is Dendrocoelum sp.

The trematodes are parasitic ‘flukes’ with one or two suckers and often a hooked attachment organ; the gut has two branches. Feeding can be by active transport through surface microvilli or by use of an oral sucker. The ectoderm lacks cilia but may have spines. Monogenea have a simple life cycle with one vertebrate host and a free-swimming larva; Digenea has a vertebrate host and an intermediate host (often a mollusk) which harbors the larval stages. Examples are Opisthorchis Sinensis (Chinese liver fluke), and Fasciola hepatica (sheep liver fluke). 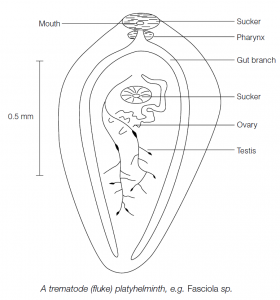 The parasitic tapeworms have a head (scolex) with hooks and/or suckers, and a body with repeating segments (proglottids), each bearing a set of reproductive organs. The mature proglottids detach and so the eggs can be dispersed. The adults are parasites, usually living in the alimentary tracts of vertebrates where they feed by absorption of food through the body surface (osmotrophy): the tapeworms lack a gut themselves. There is at least one larval stage that may parasitize invertebrate hosts. An example is Taenia solium (pork tapeworm). 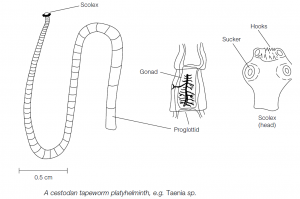